Someone Needs to Explain to Me... 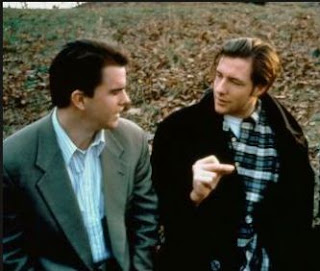 ...why Mike McGlone isn't a bigger star (other than, of course, his amazing GEICO commercials.)  I ran into him on 5th Avenue and 19th Street in March 1999. Now, I've seen some celebs on the streets from time to time (Uma, Carrot Top, etc) but I never really cared. They're just actors; who gives a shit. But when I saw Patrick from The Brothers McMullen, I was TRES excited and I did the very un-New York thing and went running up to him, panting with excitement, "oh my god youre...!!!!"

He was very nice, seemed bemused by my excitement. I asked him about the script he was holding ("Brothers M 2?"), he said it was for a movie with Denzel (Bone Collector.) We were walking alongside each other (BFF!) and I could sense he was about to do the ol' "Ooooooooookay, then...", but I couldn't let him get away without letting him know my favorite scene. And right there on the sidewalk, in front of one of my favorite actors from one of my favorite movies, I re-enacted my favorite scene for him ("Fuck...GOD????!!"), from start to finish. He laughed, shook my hand, and I gave him a flier to my band's show that weekend (he didn't come.)

My favorite running-into-a-celeb ever. Sigh.  I mean, can Ed Burns write another movie for this fucker or what?
at 1:29 PM

ONLY FOOLS AND XMASTIME